Solar wins a spot in my Pacific Crest Trail pack.

The idea of having to spend hours and hours stuck at a power outlet while charging batteries in some town along the Pacific Crest Trail was making me ill. Figuring out what to do about battery power on the Pacific Crest Trail has been a real puzzle for me. In town electrical outlets vs. solar. Hanging out near an electrical outlet babysitting a phone or battery while it charges conflicts with the type of hiking experience I want to have. Yet, given my desire to utilize my iPhone as a photo, information, and navigation tool, there is no way around the need to connect with a source of electricity. With all of the great information available on the internet about through hiking, the question of battery management was not adequately answered as I tried to solve the weight / power / time puzzle that really had me worried. While my power needs are pretty minimal the problem of how to charge the battery was really important to me. External battery pack? Solar charger? I flip-flopped back and forth more times than I can remember. I bought the external battery pack first but in the end…I’m definitely going with solar.  And, despite the extra weight, the external battery pack may also make the trip. Here’s why:

There doesn’t seem to be a solid consensus amongst PCT hikers about solar.

Since I was not finding a definitive consensus amongst through hikers, I started doing my own field testing. How much battery power did I really need? In a series of day hikes I determined that with the phone in airplane mode and using continuous GPS tracking the battery would lose just under 2% per hour*…which is roughly 20% per day assuming that I’ll be on the move 10 hrs per day. Add another 5% for taking photos/video. At a minimum I calculated that I would use 25% of the iPhone battery per day which would give me three to four days before needing some source of recharging power.

No… I don’t want to spend any time looking for outlets and charging batteries.

Diving into my recharge options I quickly learned that charging batteries is a real time suck. Hours and hours was going to have to be reserved for charging. Reviews of solar for backpacking were mixed at best, with a bias towards the negative. Not worth the trouble and weight seemed to be the consensus. OK… so I went with the consensus and after way too much time looking at batteries on the internet I ordered a 10,050 mA battery pack that promised quick charging capability. With the ability to recharge my iPhone about three times, I had just extended my range to about 12 days. Not so bad, but even with the extended range the thought of spending time off the trail and stuck at a power outlet continued to keep me up at night. Oh, well… I had made my choice…spent the money on the battery…just going to have to grit my teeth and live with it. Wrong.

The Amazon algorithms picked up on my battery anxiety and hit me with a flash sale for a solar charger. “Hurry… time is almost up!” “Save now! Sleep better!” I took the bait and bought the solar charger. Back to the trails to do some field testing. Keep in mind that my test was done in western Washington in February. Even on those rare days when we have full sun, it is not the most intense dose of radiation on the planet. So on one of the three sunny days we had in February I headed out with a purposely depleted iPhone battery so that I could see how much of a charge I could pull during a lunch break.

Wow! Solar panels really impressed while on a test hike.

The result of that one lunch break test sealed the deal. The solar unit was coming with me on the Pacific Crest Trail. In the time it took me to take a lunch break (approx. 30 minutes) I was able to gain a 20% boost to my iPhone battery. Almost a full day’s charge while I munched on peanut butter filled pretzel bites. (oh yes… that is my fuel of choice) Best of all… I was miles and miles away from the electric grid. Doing something that I would need to do on the PCT anyway… taking a lunch break. Problem solved! But wait… there is a cost to this bit of tech.

Since we are all counting every ounce that we have to carry in our packs here is the weight penalty: the battery pack and the necessary plug in weigh 8 oz. Not bad, but in the mix of other gear in my pack, this feels like a veritable brick. The solar panel weighs an even 16 oz. So, if I ditch the battery pack in favor of the solar, my pack weight goes up by half a pound. Ugh… not the direction I want to take my base weight–but if this means that I free up hours and hours of time to move freely along the PCT, I’ll take the 8 oz hit. But, as I mentioned at the beginning of this post, I am considering keeping the battery pack in the mix and taking the full 16 oz hit. It has to do with my increasing battery usage and how the solar charger works with the phone.

The iPhone is a little picky about what level of input it considers adequate to open up the pathway to charging its battery. When the solar charger first arrived at my house it was a cloudy and rainy day. Wanting to see what I could do with it, I set it out on my porch, facing the general direction of the sun, and plugged in the iPhone. The phone immediately started charging, but a few moments later it stopped. Not enough juice to keep the charge going on this cloudy day. So next I grabbed the battery pack and plugged it in. It too immediately started charging. But unlike the iPhone, it kept charging. Even as the sky grew darker and the rain started coming down, the battery pack kept pulling in a bit of juice. Impressive.

Adding the weight of the battery pack and the solar panel to the pack?

Now, I am not worried that I won’t have enough direct sun available to directly charge the iPhone at pretty much any stage of the Pacific Crest Trail. Even on those days when I am in forested sections, I will be able to find a pool of midday sun while I eat my lunch. What I don’t want to do, however, is keep the phone tethered to the charger while I hike. You’ve likely seen photos of hikers with their solar panel open on top of their pack while they hike. These are the same folks who have likely complained that their phone would disconnect from the power when they went in and out of shadow. Fair enough. That would be annoying. More important to me is that I don’t want to have to mess with the plug connection to the phone every time I want to shoot some photos or video. Thus, the iPhone needs to stay unplugged throughout the day. The battery isn’t so picky though.

If I lug the battery along with me, too, I can let it quietly charge just about whenever I want. The extra bank of power will also let me go well past the conservative 25% per day usage estimate that I had originally calculated. Ever since I started prepping for the PCT in January, I have been experimenting with apps that will let me get the most out of the camera for photos and videos. There are some pretty impressive programs that really maximize the iPhone’s capabilities but they lean pretty heavily on the processor and therefore eat up battery. In my test hike, I had not included spending time at night editing photos and video–something that if I have enough energy left after the day’s trek, I would like to do. Having the added energy potential of the battery pack would ensure that I can use the iPhone without much concern for depleting the battery.

At the time of this writing, I am four weeks out from my Pacific Crest Trail through hike start date. I am relieved to know that the solar charger will work to free me of the burden of having to find and sit by electrical outlets while I make my way north on the PCT. I cringe at the added weight but this is a choice that relieves me of what was a considerable worry. The added weight will be worth it. Besides… it’s solar. How cool is that!

*There is a considerable difference between battery wants and battery needs. If I did not want to be using continuous GPS tracking and numerous photo and video apps, I could likely stretch a full iPhone charge out for weeks. Ultimately, bringing any electronic equipment on the PCT is completely optional. There are and have been plenty of people who make this trek without any batteries. 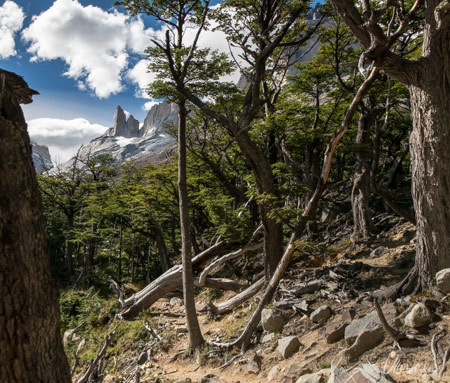 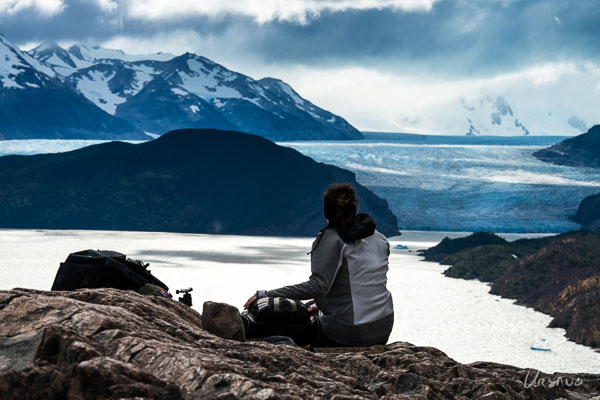 Grey Glacier – The first leg of our hike in Torres del Paine. (Patagonia) Grey glacier in Torres del Paine national park is much more spectacular than its somewhat dreary name. The glacier turned out to be the most incredible blue color and the viewpoint along the trail to Refugio Grey was a great spot…